Yoga Lingo 101: A Beginners Guide to Speaking Like a Yogi 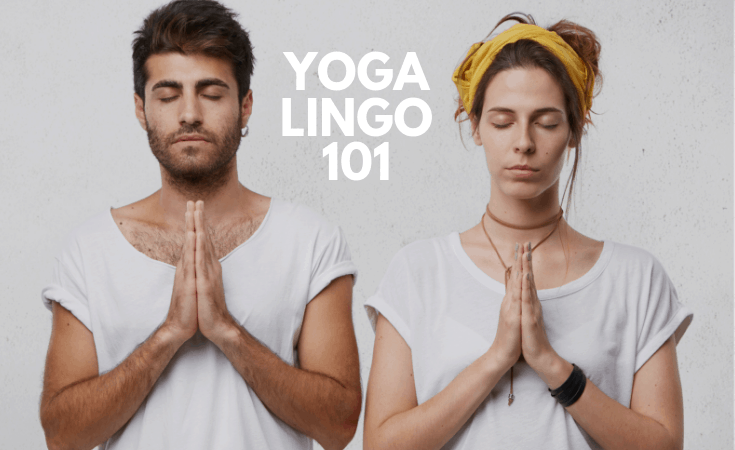 Yoga Lingo 101: A Beginners Guide to Speaking Like a Yogi

You'll hear all sorts of weird and wonderful yoga lingo at yoga class.

Some of it is ancient and deeply rooted in tradition. A lot of it is new age spiritual stuff. All of it is unusual.

It's also rapidly evolving and expanding, with new ideas and interpretations arising every day. Which makes it all the more difficult, to know what yogis are talking about these days.

There's a pretty steep learning curve involved in trying to learn a new practice that's taught partially in another language. I'm sure you've had at least one moment, where your yoga teacher has asked you to do something and you're just like....

I know I have. I still do occasionally.

To understand it all, you'll literally have to learn another language, so let's not worry about that. But, there will be stuff that you'll encounter regularly if you go to classes. So it's best to brush up on the basics.

So, if you're struggling to tell your mantra from your drishti — buckle in for a yoga lingo masterclass. 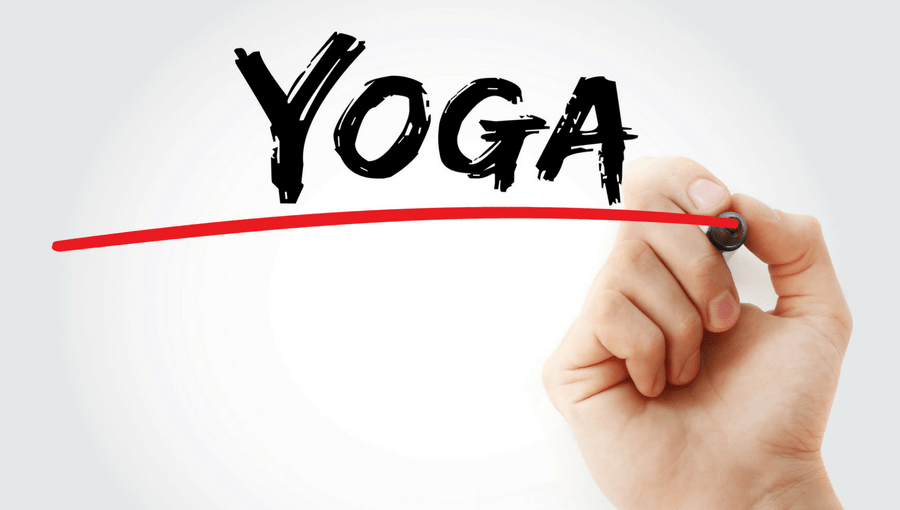 Before we delve into the bizarre language of the yoga teacher, we'll start with an actual language — Sanskrit.

Sanskrit is one of the oldest languages in the world. The name Sanskrit literally means "defined" or "perfected".

In yoga, Sanskrit is very important.

Every letter of the Sanskrit alphabet has a unique sound and vibration, that bring about specific effects in the physical and spiritual bodies when spoken. It also happens to be the language that yoga is defined in; so every pose, chant and custom has a unique Sanskrit name.

Lucky for us, we've gone and replaced those strange authentic pose names with our fantastic western ones.

Nothing screams enlightenment like "Happy baby pose" and don't forget the wickedly original "Legs behind the head pose".

Joking aside, you'll usually hear a mix of the old and the new, depending on how traditional your teacher is.

Don't worry, this isn't a history lesson. I won't be going deep into the historical and cultural terms here, but there are some that you will inevitably run into.

Here's a list of the ones you should really know, and the kinds of ways you can expect to hear them. 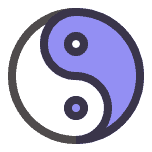 The one we've all heard of but never really understood. That's understandable really, yoga has come to mean many things in the modern world.

To some, yoga is an exercise practice, a series of poses or a method of stretching. To others, it's a spiritual practice or a type of meditation.

In truth, it's all of those things.

The word yoga comes from the Sanskrit meaning "union" or "yoke".

Yoga is, therefore, a system, with the purpose of uniting ourselves with our highest nature. 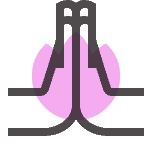 You'll hear the word Namaste at the end of every yoga class.

It's a gesture used to acknowledge the connection between our soul and that of another person, the union of spirits so to speak. 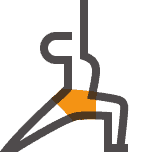 In the context of a class. Asana is the term used to describe the physical poses themselves.

e.g. "In this asana it's important to keep a neutral spine". 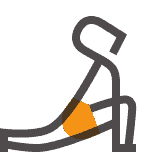 Vinyasa is used to describe the coordination of movement with the breath, and to describe a sequence of yoga poses.

e.g. "As you flow through vinyasa, make sure to keep in time with the breath".

The word prana translates to "vital life force". In much the same way that Asian cultures believe in the existence of Chi within the body, yogis believe in prana.

e.g. "Breathe deep, to cultivate prana within the body". 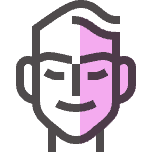 Pranayama is the practice of controlling the breath in order to manipulate prana in the body. You'll often have parts of a yoga class dedicated to pranayama, especially at the beginning to set the tone for the class.

Bandhas are internal locks in your body that you can engage by activating different muscle groups. They provide strength and balance when activated in poses.

e.g. "Engage your mula bandha as you enter this pose". *Side note. Your mula bandha is located in your pelvic floor. Not an easy one for guys to grasp.

A mantra is a certain sound, word or phrase, that when recited — has a transformative effect on the mind. Yogic theory says that you can activate your chakras through sound, by making the right energetic frequencies.

e.g. "Pick a mantra that resonates with you". 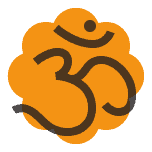 Om is the original mantra. It's said to be the sound of the universe, and the one first heard at its beginning.

Classes are often opened and closed with the chanting of Om together. 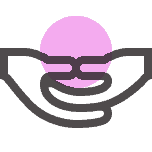 A mudra is a physical gesture made with your body, most commonly using your hands.

e.g. "Once you're comfortable in the lotus position, bring your hands into the Gyana mudra".

Your drishti refers to the point of your gaze.

Basically just where you choose to look at when you're focusing in a pose. This can mean a spot on the floor during dancer pose, to keep your balance.

e.g. "Find your drishti and stabilise your body".

Or it can also be used in a more metaphysical sense. You may be asked for focus your sight inwards during meditation.

e.g. "Focus your drishti on your third eye. The space between your eyebrows". 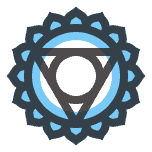 One of seven energy centres in the body. Located in different areas of the body, each is said to represent a different kind of energy.

For example, your heart chakra is located unsurprisingly, in your heart. The chakra can be energised by cultivating is respective energies — love and compassion.

More commonly it's interpreted as a metaphor. To help you focus your body and mind in specific ways.

e.g. "Push your chest forward and open your heart chakra" 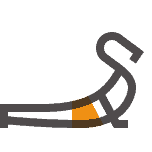 Chaturanga is the Sanskrit name for the four-limbed staff pose. Essentially it's a low plank but it's held with the arms like a push-up, with elbows bent and tucked in (

e.g. "Hold Chaturanga for 30 seconds, then continue through vinyasa." 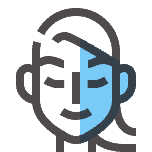 Savasana  (otherwise known as corpse pose) is the final asana in every yoga class.

As the name suggests, you'll be lying down like a corpse for a while. It's an opportunity to relax and observe the sensations in your body, and to enable all that you’ve experienced in your practice to be processed and absorbed.

e.g. "When you're ready, get comfortable on your mat and take savasana". 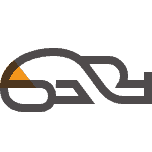 Hatha is another of those slightly ambiguous terms in yoga.

The name refers to the practice of the physical postures. So all yoga is technically Hatha yoga.

However, you'll often see Hatha Yoga on a class timetable. This is because Hatha has also come to mean a more general, slow-paced yoga class, that's focused on proper execution of the various asanas and pranayama. 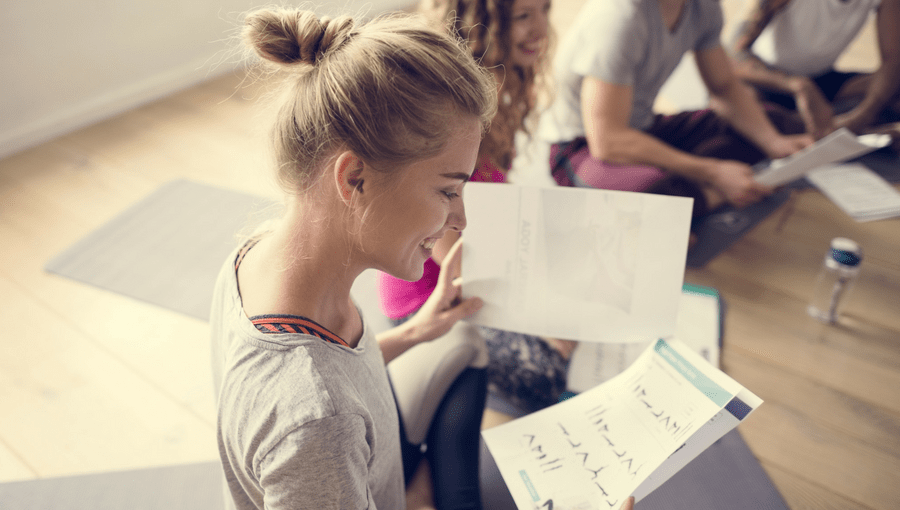 In addition to all the Sanskrit names and classical yoga terminology, there’s also the interesting ways in which yoga teachers try to convey their ideas. I think being a yoga teacher gives you creative licence to make this stuff up, I’m forever hearing strange new expressions in class.

To be fair, when they’re explaining poses, they often have to explain some very specific physical ideas, and it’s not always possible to demonstrate it. So now we get all these colourful metaphors coming up.

Here’s a bunch of the common ones.

Being asked to stack one body part over another, is a common alignment cue that teachers use.

e.g.  “Lift one leg up, rotate it out and stack your hips on top of each other”

“Breathe into your xx”

Breathing into a bodily area is less of an alignment cue and more of an attention cue.

e.g. “Breathe into your hips as you sink into Pigeon pose”.

You might often hear your teacher tell you to “Tuck in the tailbone” during asanas like Warrior II.

You might be wondering if you have such a bone… and you do.

It’s the common name for your coccyx, located at the bottom of your spine. Tucking your tailbone means pushing your hips forward to straighten and lengthen the spine.

“Sit up on your sit-bones”

Your sit-bones are another affectionate term for a part of your lower anatomy. You’ll find them located in your butt cheeks, they’re the pointy hard parts that you “sit” on.

You’ll often be asked to “Sit up your sit-bones“.

This is an alignment cue to sit up and pull away the flesh in your butt, so that you’re sitting directly on your sit-bones.

There are a million other names, phrases and metaphors that you might encounter on your yoga journey.

In this article, you’ve learned a bunch of the ones most commonly used in class.

Don’t worry about learning them all right away. You’ll be slowly introduced to them by your yoga teachers, and for the Sanskrit names — they’re often used alongside their English counterparts.

If you start to take an interest in yogic philosophy and texts, there’s a world of new language to learn.

So just like your practice, treat it like a journey — and take it one step at a time. 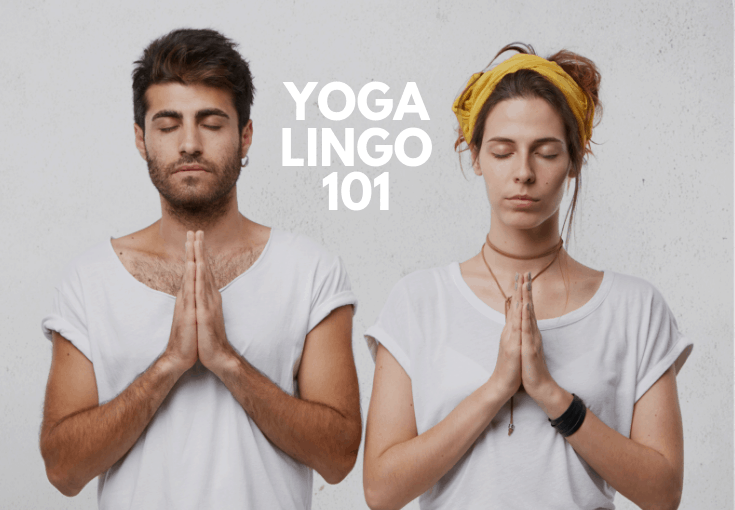 The Best Yoga Mats for Men of all Sizes