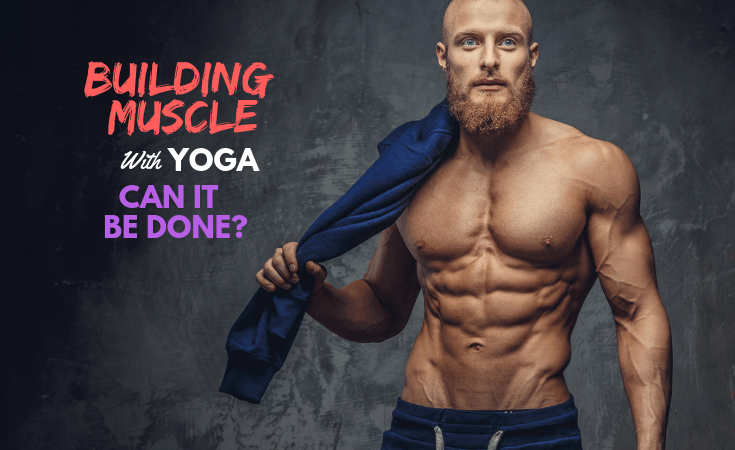 Does yoga build muscle? It's one of the first questions that comes to mind for new yogis, and for good reason. We're attracted to the many benefits of yoga, but we're not ready to give up on the idea of having that muscular gym physique.

Is it so wrong to want a butt body that can crack a walnut, and do the splits?

In an ideal world, we wouldn't have to spend any time at the gym, mindlessly picking things up and putting them back down. Our yoga practices would be enough to get everything we want out of our fitness regime, and more.

What if I told you we could have our cake, and eat it too?

Yoga builds muscle just as your typical gym routine does. After all, it's just a different application of bodyweight exercises. From progressive overload to metabolic stress, a strong yoga practice will naturally engage these muscle building processes, but we can optimise them through pose progressions, flow structure and intensity.

Read on to find out how yoga builds muscle and how to maximise the process in your practice.

Quick Navigation: What You'll Learn in This Guide
Yoga for Muscle Building
Benefits of Building Muscle Through Yoga
How Does Yoga Build Muscle?
Optimising Yoga Practices for Muscle Growth
Which Yoga Poses Build the Most Muscle?

Benefits of Building Muscle Through Yoga

Whilst yoga might not be the quickest way to pack on pounds of muscle, it comes with its own advantages over hitting the gym (and has even been shown in studies to improve performance at the gym).

How Does Yoga Build Muscle?

On this, I look to Jeff Cavaliere – expert physical therapist and strength coach – to neatly explain these concepts. The video approaches these from the point of view of lifting weights, but they all apply to yoga, and I'll explain how below.

Most men are familiar with the concept of progressive overload. After all, it's the core principle behind weightlifting.

It's simple really. You keep lifting heavier things, and over time, your body responds by building muscle to facilitate that.

Building muscle through yoga works through the same principle, but it's a little more complicated in practice. Sadly, it's not as easy as just adding plates to a bar. In yoga, the weight we're lifting is our body, and you probably don't want to be adding 10lbs to it each week..

So how do we use progressive overload in yoga? 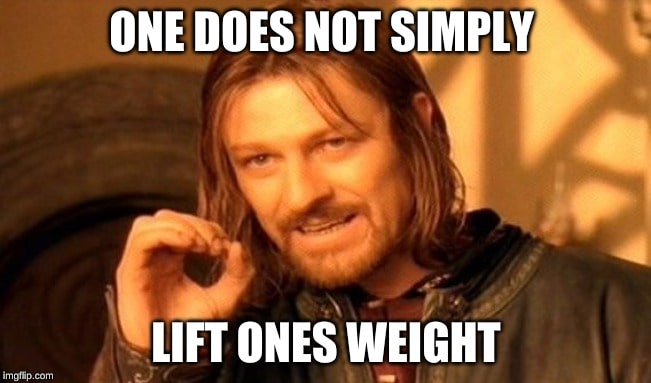 The answer is pose progressions. Let me explain.

Any yoga pose can be modified. In class, a teacher will often show you a few variations of each pose – from easy to hard – to make it accessible to students of all levels. We can use these progressively difficult variations as our own form of progressive overload. Simple.

For example, if you're looking to build muscle in your arms and shoulders, Chaturanga is a great pose to practice. Depending on your current level of strength, there's a Chaturanga variation for you.

The driving force of this process is the tension that your muscles are undergoing.

But what if you're already practicing the most difficult variation? How can you further increase that tension? Don't you worry, there's another driver of progressive overload – and that's volume.

In simple terms, do more of your muscle building poses.

Metabolic stress is another concept you might be familiar with, even if you didn't know the name.

It's a physiological process that your muscles and tissues undergo during exercise, caused by the accumulation of waste metabolites in the muscle. You know it as "the burn!"

That feeling when you're approaching your last rep and your muscles are bulging and screaming at you to stop. That's metabolic stress.

Fortunately, the process has been shown to have a beneficial effect on muscle growth.

The amount of metabolic stress you generate during a yoga practice is going to depend heavily on the kind of yoga you're practicing. A vigorous Ashtanga or Vinyasa flow class will have your muscles burning in no time, whereas a gentle Yin class will have the opposite effect.

Muscle mechanical damage. A dangerous sounding mechanism, but it is what it is.

As the name suggests, it's literally microscopic tears in muscle fibres. Caused by the mechanical action of your muscles. Enough damage to cause your muscles to increase in size as they heal, and usually enough damage to make the stairs a struggle the next day too.

Normally these tears are caused by the tension they're put under when lifting heavy weights. In fact, it's the downward part of a weight rep that is thought to be effective at building muscle hypertrophy. Otherwise known as the eccentric phase, where muscles are lengthening.

Yoga is surprisingly effective at building muscle through mechanical damage, because the poses are mostly eccentric contractions. Training that exploits this process is called eccentric overload. It's quite dangerous to do with weights (as you're by definition putting something down that's too heavy for you to lift) but it's easy to do through yoga.

Yoga is surprisingly effective at building muscle through mechanical damage, because the poses are mostly eccentric contractions.

Any yoga pose involving lowering your body can be eccentric training. You can change the intensity by slowing down your descent, or changing the angle that you're supporting yourself on to make it more difficult. Like lowering yourself in Chataranga vs a press-up position.

Firstly, it must be said. As long as you're practicing yoga regularly and advancing in your practice, the muscle building process is somewhat built-in. Sun Salutations for volume, long vinyasas for metabolic stress, and pose variations for progressive overload, just to name a few.

However, with an understanding of how these muscle building processes are activated through yoga, it's entirely possible to build a practice that maximises muscle growth in target areas.

I won't go into individual muscle and pose examples, there are too many possible combinations, but here are my overall recommendations on how to optimise your yoga practices for muscle growth:

Which Yoga Poses Build the Most Muscle?

There's a reason anyone looking to build muscle in the gym should be doing the big lifts. Nothing will get your body into an anabolic state faster than the likes of deadlifts and squats.

Again, yoga is no different.

Yoga poses that use the full body, in big compound movements, are the most effective. These can be your "power poses".

I told you, you'd have to work for it right?

Nothing will ramp up that metabolic stress and build the burn quite like Chair pose.

The biggest muscles in the body are in the legs, and Chair pose uses just about all of them. Holding a rock-solid Chair pose will have you engaging your glutes, your quads and your core.

There's a lot going on in Warrior poses.

Just to start, you're sinking into your hips, tightening your core and glutes, raising your arms and engaging your quads. It's a powerful, full-body pose, that's going to test all of your muscles at once.

Being the most natural expression of strength progression in yoga, arm balances are going to be a key component in muscle building.

Chaturanga comes up a lot in yoga. It's part of your Sun Salutations and most Vinyasas.

It's a pillar of a pose (literally) that forces you to engage your core and your legs, whilst holding your weight on your arms. It effectively utilises all three mechanisms of muscle-building discussed in this article – and lucky for us, as yogis, we do it a lot!

So what do you guys think? Can yoga build muscle? Have you successfully put on muscle mass through yoga alone?

If you have, let me know your secrets in the comments. 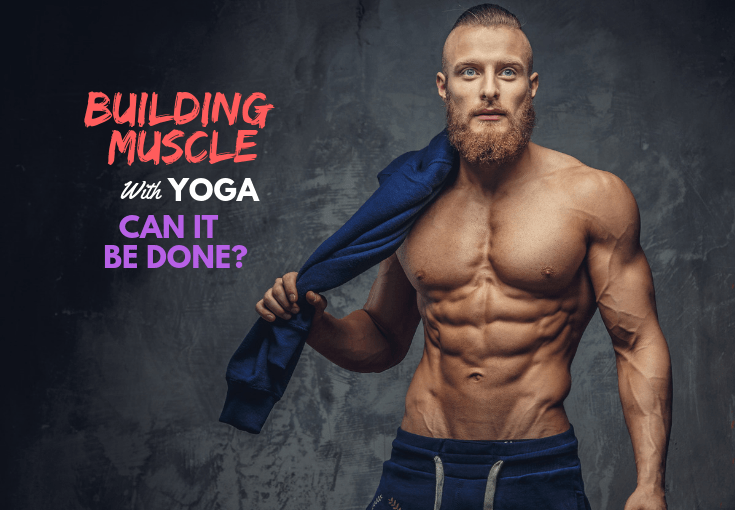 Should You Warm up Before Yoga?